Connectivity options on the Sony HT-S400 include HDMI ARC, Optical, and Bluetooth. 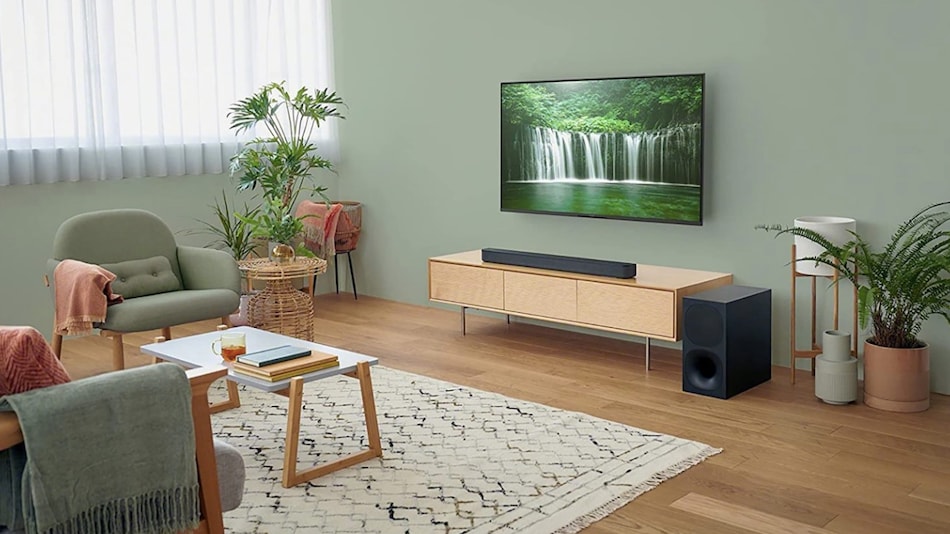 The Sony HT-S400 soundbar has a 2.1-channel configuration with a rated sound output of 330W.

Sony HT-S400 soundbar speaker system with wireless subwoofer has been launched in India, priced at Rs. 21,990. The new soundbar system from Sony is among its most affordable in the category in India, and has a 2.1-channel configuration with a two-channel bar speaker and a separate wireless subwoofer. The speaker system has a rated sound output of 330W, making it considerably louder than what most televisions offer through their built-in speakers, thus pitching it as an affordable upgrade to your home theatre sound.

The Sony HT-S400 soundbar has a “Best Buy” operating price of Rs. 21,990 in India, and is available in a single Black colour option via Sony Center stores, major electronics retailers, major e-commerce portals, and Sony's own ShopAtSC online store.

At this price, the HT-S400 goes up against competition from brands such as JBL and Polk Audio, as well as Sony's own Sony HT-S40R 5.1-channel soundbar speaker system which is priced at around Rs. 27,000.

Sony's new soundbar is not too large, and has a 2.1-channel configuration with a separate wireless subwoofer. The speaker system is made up of a bar speaker with two drivers rated at 200W in total, along with a 130W subwoofer. The subwoofer weighs 7.3kg and only supports wireless connectivity with the 2.4kg bar speaker, with the latter serving as a master device and handling connectivity with external devices. Each component must be connected to a separate power socket.

Connectivity options on the Sony HT-S400 include HDMI ARC, Optical (Toslink), and Bluetooth 5 with support for the SBC Bluetooth codec. There is an included remote which can be used to control the HT-S400, including adjusting the volume of the system or the subwoofer separately. HDMI CEC is supported, so the HT-S400 can be controlled by a compatible source device such as a TV or home theatre receiver.

It features support for only the Dolby Audio format — no advanced audio formats are supported on the Sony HT-S400. The soundbar from Sony is available in just a single Black colour option, and has touch buttons at the top for basic controls including power, volume, and source selection. When used with a compatible Sony Bravia television, the soundbar can be connected wirelessly, without disabling separate Bluetooth connectivity.

Do the Galaxy Z Fold 4 and Z Flip 4 offer enough over last year's models? We discuss this on Orbital, the Gadgets 360 podcast. Orbital is available on Spotify, Gaana, JioSaavn, Google Podcasts, Apple Podcasts, Amazon Music and wherever you get your podcasts.

Ali Pardiwala Email Ali
Ali Pardiwala writes about audio and video devices for Gadgets 360 out of Mumbai, and has covered the industry for a decade now. Ali is a Senior Reviewer for Gadgets 360, where he has regularly written about televisions, home entertainment, and mobile gaming as well. He is a firm believer in 4K and HDR on televisions, and believes that true wireless earphones are the future of the personal audio industry. Ali is available on Twitter as @AliusPardius and on email at alip@ndtv.com, so do send in ...More